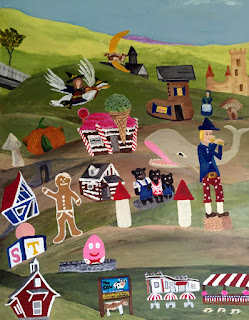 During our Christmas vacation, Jenny & I added to the mural wall at the cabin in PA (Jenny painted Humpty Dumpty, helped me pick angles of pictures and locations on the wall).  Characters are from an outing we had one year to Shellsburg, just up the road from the cabin.

"Story Land was a privately-run fairy tale park that closed in the 1980s. The 18-ft. tall Pied Piper statue stood on the edge of US 30, a colorful attention-getter that drew people off of the Lincoln Highway and into the woods, where more Mother Goose statues beckoned. Today, a few of those old statues can be seen behind Piper's Place Country Originals, a crafts and plant store run by the daughter of the original owner. The large white castle entranceway has been torn down. The Pied Piper is kept in good repair, still serving as an effective eyeball-grabber after all of these years. But don't go wandering into the woods to look at Humpty Dumpty, the Old Woman's Shoe, and the Big Whale."

In the bottom right is "The Cow," our favorite soft serve ice cream stop in the summer time!
Close ups of painted characters:  Story Land Paintings 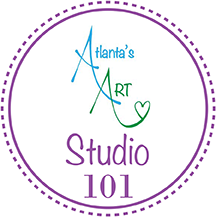